The images you see in this section of the site are used with permission from the creator. Copyright remains with the featured photographer at all times.

Collected here is a selection of my features and interviews with photographers. PDFs are stored on my own external site. After viewing a full article, click back in your browser to return here.

[WARNING] There are images and phrases contained in these stories which, taken out of context, could cause offense. 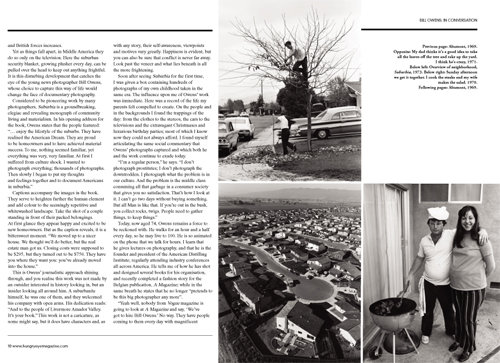 It is 1972 in America and The Dream is being sold at a discount and on credit to the masses. All across the nation must have trends adorn front rooms, couples sport the latest fashions and driveways house the newest cars. Life is good and on track. Step outside however and the world is a different place altogether.

President Nixon is caught on tape discussing the use of the CIA against the FBI in the Watergate scandal. US actress and household name Jane Fonda causes nationwide outrage when she is photographed sitting on a North Vietnamese anti-aircraft gun. Terrorism enters a new phase with the deaths of 11 Israeli athletes in Munich, Germany and an escalating death toll in the UK and Northern Ireland as violence between the IRA and British forces increases.

Yet as things fall apart, in Middle America they do so only on the television. Here the suburban security blanket, growing plusher every day, can be pulled over the head to keep out anything frightful, and it is this disturbing development that catches the eye of the young news photographer Bill Owens, whose choice to capture this way of life will change the face of documentary photography… 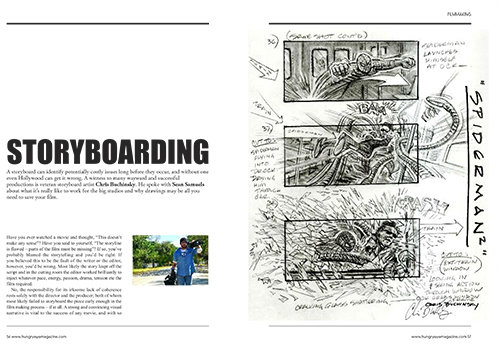 Have you ever watched a movie and thought, “This doesn’t make any sense”? Have you said to yourself, “The storyline is flawed – parts of the film must be missing”? If so, you’ve probably blamed the storytelling and you’d be right. If you believed this to be the fault of the writer or the editor, however, you’d be wrong.

Most likely the story leapt off the script and in the cutting room the editor worked brilliantly to inject whatever pace, energy, passion, drama, tension etc. the film required. No, the responsibility for its irksome lack of coherence rests solely with the director and the producer; both of whom most likely failed to storyboard the piece early enough in the film making process – if at all.

A strong and convincing visual narrative is vital to the success of any movie, and with much at stake these days at the box office; it is surprising that this costly mistake is ever made. But for storyboard artist Chris Buchinsky, it is one he has seen made all too often… 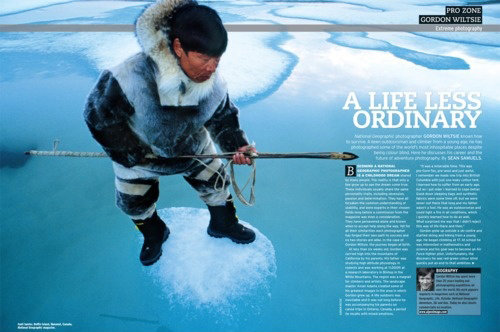 National Geographic photographer Gordon Wiltsie knows how to survive. A keen outdoorsman and climber from a young age, he has photographed some of the world’s most inhospitable places despite being colour blind. Here he discusses his career and the future of adventure photography… 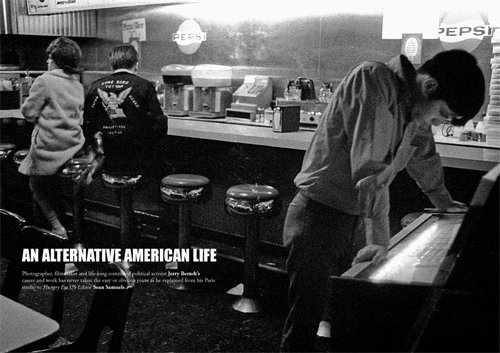 ...For me the good pictures are not just good, they are great. They are powerful reminders of the human capacity for states of violence, injustice, sadness and ignorance as seen through the eyes of a man who has willingly embraced them all.

His self-awareness has served him well and as I picture him in his studio surrounded by his life’s work with prints covering every last inch of wall and film hanging from wires suspended in a corner of the room, I wonder what else lies hidden perhaps forgotten in the files on his bookshelves and desks.

Like the jazz record that has played in the background all the while we talk, Jerry Berndt’s life and career has taken many unexpected turns. He has come a long way and with so much still to give, I hope to take up his invitation to an opening night and to see him take the stage. “Have I told you yet that I used to play a little bit of blues harmonica with Muddy Waters?” No, Jerry, you have not, please do. 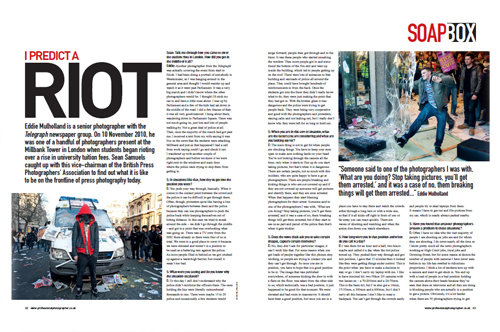 Eddie Mulholland is a senior photographer with The Telegraph newspaper group. On 10 November 2010, he was one of a handful of photographers present at the Millbank Tower in London when students began rioting over a rise in university tuition fees. Sean Samuels caught up with this vice-chairman of the British Press Photographers’ Association to find out what it is like to be on the front line of press photography today…

Jim Richardson was immersed in photography from a young age. Growing up on a farm in Kansas in the 1950s, he quickly learned to make use of the cameras his father, a keen amateur photographer, regularly brought home with him. He would trawl the pawn shops that lined the freeways between Kansas and Texas — the route he used to transport eggs between the two states – and it was not long before Jim had access to a good collection of cameras… 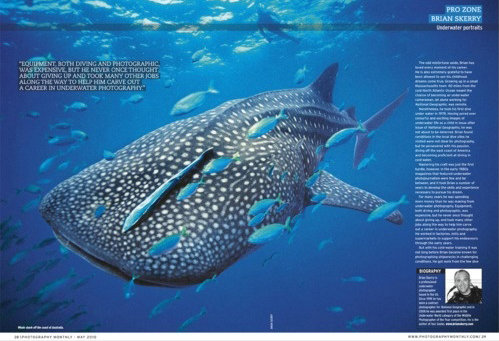 Brian Skerry has spent more than a year of his life under water. Over the last 30 years he has photographed beneath the frozen realms of the Arctic, in the shallow tropical waters of the Bahamas and throughout the deep oceans in between. He has been chased by a sperm whale in the Azores and lost beneath an ice pack. While in Canada he once surfaced to see his dive boat sinking. He later returned to the wreck in the vain hope that he could recover some of the camera equipment that went down with it…

The images you can see here should come with a warning. Immediately provocative, they may haunt you long after you have stopped looking at them.

Thrown into a line-up of other documentary photographers’ work, they are recognizable straightaway. Lyrical, engaging and foreboding all at once, they are a triumph of reportage and they command me to find out more.

The photographer has served his purpose. He has me hooked and his obsession has become mine.

And it is an obsession. Look at the images again. Can you think of any other way the creator Danny Wilcox Frazier could capture such heartfelt intensity?... 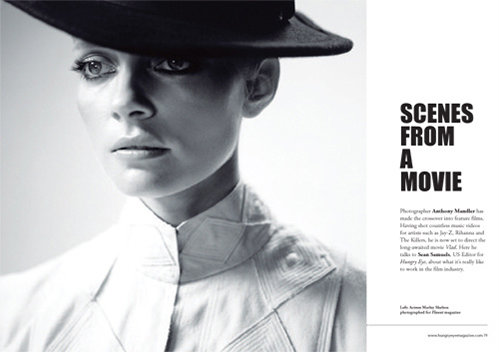 Sean Samuels: You are working on two feature films. Can you tell me more about them?

Anthony Mandler: The first film is Vlad, which is taking big steps forward. We are exploring cast, exploring budgets and locations. We have a script that we love and we are starting to take meetings about it with actors. It’s a big movie and will require a clever crew and schedule to work out how to film it all. We are talking about shooting in Romania, where there could be weather issues. For all we know, stuff could get locked off for six to eight months. The other film, Die in a Gunfight, is a smaller movie, which will be more mobile and shot faster. It’s set for the East Coast of America and we have a lot more flexibility as to when we can start it.

Sean: What are the films about, and what do you love about their stories?

Anthony: I have always been attracted to stories about characters dissolving; especially male characters that are hitting crossroads and having to make decisions which are emotional and intellectual, as well as physical. I want to see how these decisions are made, and how they relate to the world the characters are in. Vlad is essentially a revenge story, but at its core is a story about a child who loses his innocence at a young age and spends the rest of his life trying to rebuild the Camelot of his youth. In defending that honour he loses his mind… 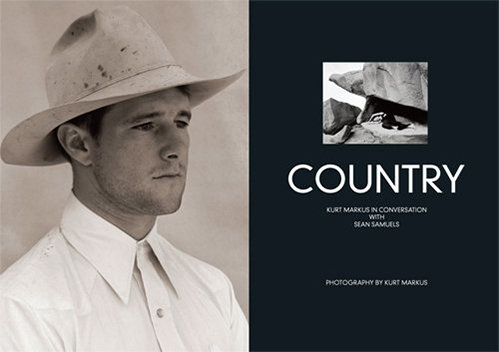 Internationally acclaimed photographer Kurt Markus is as at home on a fashion shoot as he is on location off the beaten track anywhere in the world. He has made pictures for Vanity Fair, GQ, Rolling Stone, Vogue, The New York Times Magazine and Esquire. He has shot advertising campaigns for clients such as Armani, BMW, Sony, Levi’s Calvin Klein and Nike. But his home and his heart s in Montana where he was born and raised…

An ethereal darkness infuses the work of French-Italian photographer and journalist Jean-Marc Caimi. His pictures depict people who have slipped between the cracks made by worlds tearing apart. They are the ghosts and creatures from forgotten underworlds, lost, misplaced or hidden from sight. These are important images; they keep these phantoms alive.

Whether he is photographing a town polluted by the factory that served it or Libya after the revolution, his stories come to the aid of the people cast aside once the corporations and politicians have had their fill.

In the series you see here, Caimi has documented the daily life of mentally ill convicts in a private rehabilitation centre in Rieti, Italy. These government funded places, often called “villas,” were once hotels or hospices.

Matt Weber has been photographing NYC for 29 years. In this audio interview he talks about the people of the city, the love and the fights, his time driving a cab and how his life as a street photographer has taken its toll.

In this telephone recording, veteran photographer Tom Arndt explains why he loves to shoot on the streets and how he once accosted Robert Frank. He discusses the importance of printing one’s own work and recalls some of the friendships that have helped him on his incredible journey.